Panicked EU chiefs have scurried to invite Donald Trump to discuss trade negotiations over fears he would rather deal directly with Britain.

The move would be a hammer blow to Brussels, which is still reeling from the UK’s decision to leave Europe in June.

Referring to Trump’s slogan of ‘Let’s Make America Great Again’, Europe’s top brass Jean-Claude Juncker and Donald Tusk told reporters Europe and the United States ‘simply have no option but to cooperate as closely as possible’.

Ukip figurehead Nigel Farage, who flew to the US to offer his services to Mr Trump, said Britain would benefit from having a President ‘who likes our country and understands our post-Brexit values’.

He said the ‘establishment is in deep shock’ after Mr Trump’s unexpected victory over Hillary Clinton, describing it it as ‘bigger than Brexit’.

Mr Farage, nicknamed ‘Mr Brexit’ by his friend Mr Trump,said: ‘Voters across the Western world want nation state democracy, proper border controls and to be in charge of their own lives.

‘I commend Donald Trump for the courage with which he has fought this campaign and I look forward to a closer relationship between the US and the UK.

‘We now have a President who likes our country and understands our post-Brexit values.

‘Prepare for further political shocks in the years to come.’

Tusk and European Commission boss Jean-Claude Juncker said in a letter that they wanted to discuss ‘unprecedented challenges’ including the Islamic State jihadist group, the conflict in Ukraine, and a troubled EU-US trade deal under negotiation.

‘We would take this opportunity to invite you to visit Europe for an EU-US summit at your earliest convenience.

‘This conversation would allow for us to chart the course of our relations for the next four years,’ they said in a letter of congratulations to Trump.

‘While respecting the democratic choice of the American people,’ he said, ‘We are at the same time aware of the new challenges that these results bring.

‘One of them is this moment of uncertainty over the future of our transatlantic relations,’ he said.

Tusk added: ‘The events of the last months and days should be treated as a warning sign for all who believe in liberal democracy.’

Following Trump’s victory, EU foreign ministers will hold a special meeting in Brussels on Sunday at the invitation of the bloc’s foreign policy guru Federica Mogherini. 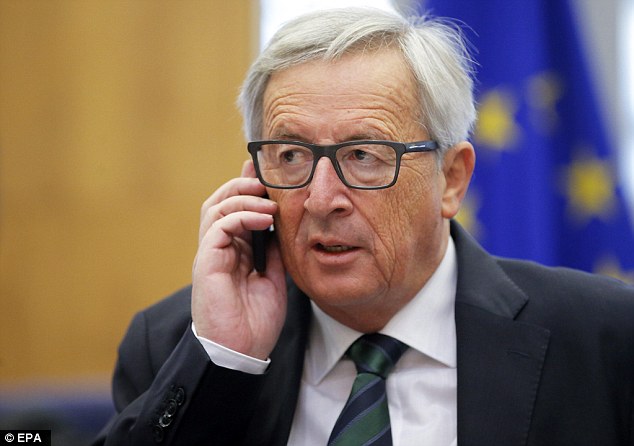 They will have an ‘informal dinner to exchange views on the way forward in EU-US relations following the US elections,’ a spokeswoman for Mogherini said.

Separately Martin Schulz, the head of the European Parliament, urged Trump to show ‘responsibility’ after a divisive campaign, adding that he had ‘managed to become the standard-bearer of the angst and fears of millions of Americans.’ 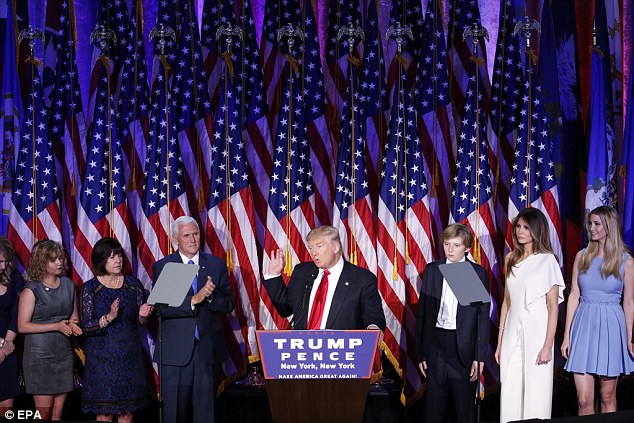 Mr Farage’s claim that Britain is well placed to strike a trade deal with America comes despite the House of Commons ridiculing Mr Trump a year ago.

The 45th President said areas of London had become no-go areas due to Muslims in a speech in which he said all those practicing Islam should be banned from America. 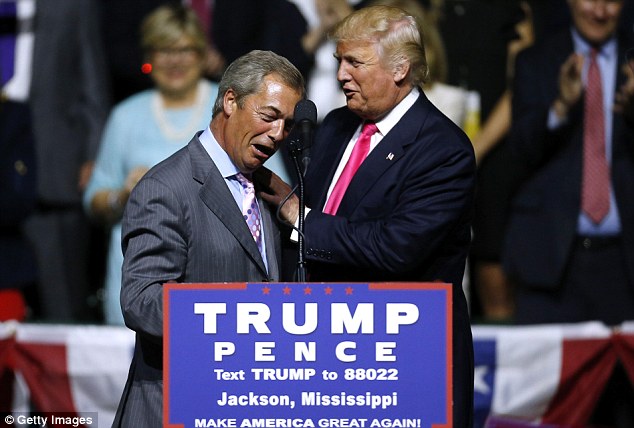 Foreign Secretary Boris Johnson then dismissed the claims as ‘utter nonsense’ but today reached out to Mr Trump, saying: ‘Congratulations to Donald J Trump and much looking forward to working with his administration on global stability and prosperity.

‘I believe passionately in the importance of the US-UK relationship and am confident we can take it forward together.’