Nigerian central bank Governor Godwin Emefiele faces the unenviable task of balancing the needs of an economy that shrank every quarter so far this year with an inflation rate that’s at the highest in more than a decade.

Emefiele will announce the Monetary Policy Committee’s decision on interest rates on Tuesday afternoon in Abuja, the capital. While all but two of the 20 economists in a Bloomberg survey forecast the MPC will continue to hold its benchmark interest rate at a record high of 14 percent, a 2.2 percent year-on-year contraction in gross domestic product in the third quarter complicates the task of the central bank trying to fight price growth and support the nation’s currency amid a dire shortage of foreign exchange.

“They’re between the devil and the deep blue sea,” Omotola Abimbola, an analyst at Afrinvest West Africa Ltd., which predicts no change, said by phone from Lagos on Nov. 17. “Hiking rates wouldn’t do any good and neither would cutting rates.”

Emefiele said on the weekend the central bank would be failing in one of its “cardinal objectives” if it cut borrowing costs, while also stating that a high inflation rate holds back economic growth. 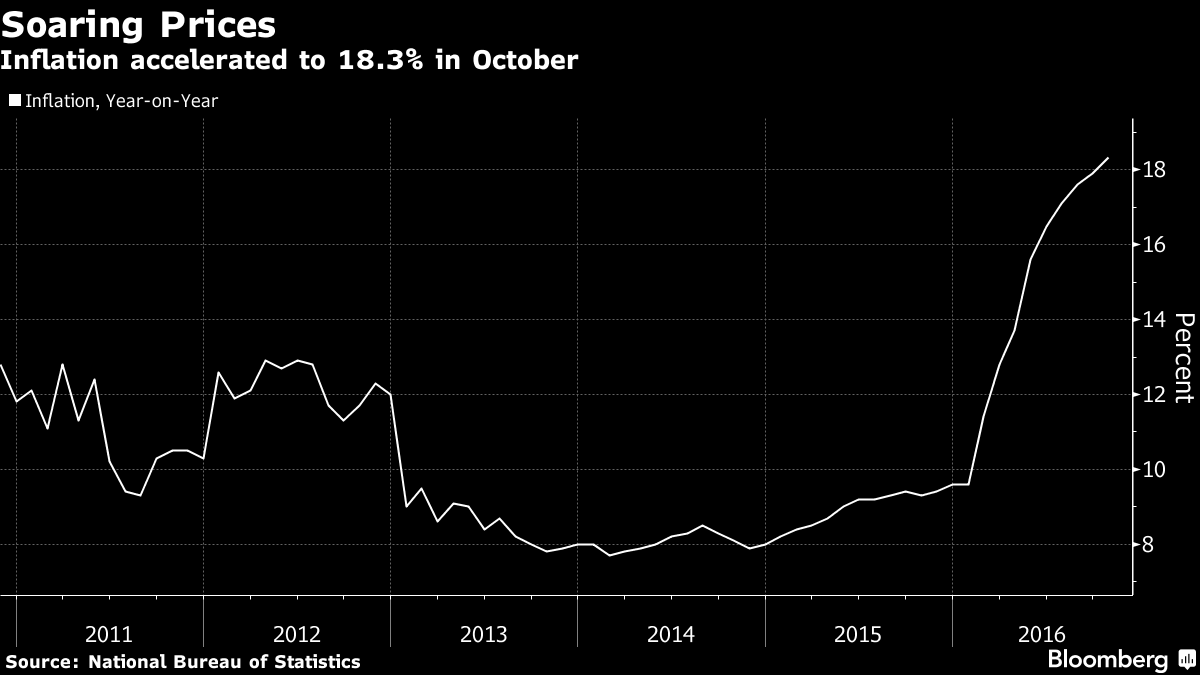 Inflation accelerated to 18.3 percent, the highest rate in 11 years, in October and is more than double the central bank’s target of between 6 percent and 9 percent. Consumer prices are growing at almost 20 percent year-on-year in urban areas thanks to city-dwellers’ higher propensity to buy imported goods, which have become more expensive amid the scarcity of dollars, according to John Ashbourne, an economist at Capital Economics Ltd. in London. He forecasts the central bank will increase its monetary policy rate to 16 percent. 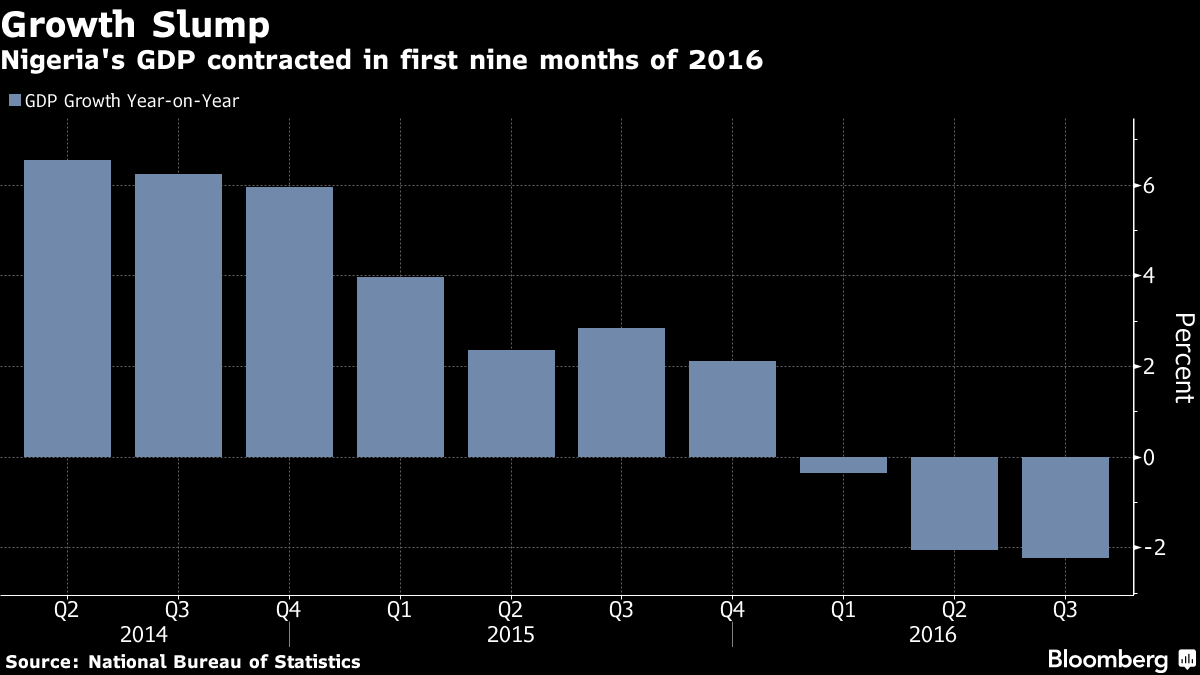 Gross domestic product contracted in the third quarter as the production of oil, the nation’s main export, continued to drop and factory output declined. The economy is on track to shrink 1.7 percent in 2016, according to the International Monetary Fund, which would be the first full-year contraction in more than two decades. The weak data will probably convince the MPC to avoid increasing borrowing costs, according to Sewa Wusu, head of research at Sterling Capital Markets in Lagos.

“The choice between stimulating economic growth and curtailing the spiraling inflationary pressure will dominate discussions at the MPC meeting,” Wusu said by e-mail. “The concerns over the consecutive negative growth path may likely undermine the arguments for raising the benchmark rate.”

Overseas investors have been scared away because of Nigeria’s increased capital controls since oil prices crashed in the second half of 2014. When Emefiele raised the benchmark rate to 14 percent in July, just over a month after the naira was devalued, he said investors had been “lukewarm” about bringing new capital into the country.

Despite the naira losing almost 40 percent of its value against the dollar since the June 20 devaluation, foreigners have remained wary of re-entering local markets, claiming that the central bank is still manipulating the currency. The black market exchange rate of around 465 per dollar is much weaker than the official rate of 315, with many businesses unable to get the foreign exchange they need from their banks to pay for imported raw materials and equipment. The government recently started threatening informal money-changers with arrest in an effort to bring down the street price of dollars.

Boko Haram: One million people cut off from aid in Lake Chad - U.N.

Nigeria Economic Recession may have bottomed out – NBS Data

Nigerian Government Investors’ Roadshow and Fitch’s Rating: One Bad News Too Many

Opinion: Buhari, Before It Is Too Late ! – Scribe Openiyi

Economic Recession: MTN May Put Off Nigeria Listing Until 2018